You are here: Home / Latest / #PresidentsDay Is Taken Over By BTS’ RM On Twitter 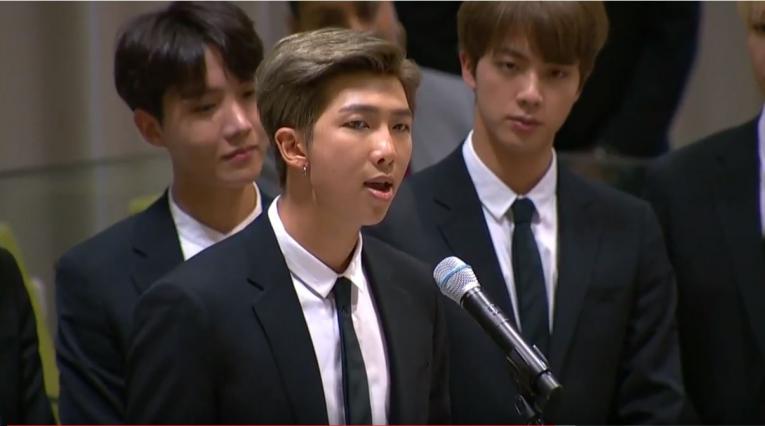 February 18 is President’s Day in the United States of America. This day honors US presidents, especially George Washington, America’s first ever president.

Thus, locals were surprised to see that instead of their favorite presidents trending on Twitter, it was RM of the popular Korean band BTS.

RM, born Kim Namjoon, is the 25-year old leader of the now worldwide-famous septet. Fans have been fondly calling him “Leader” or “President” for many years now. This can be presumably attributed to his high intellect and charm.

He has also displayed superior leadership skills as evidenced by the harmonious BTS team who have been living and working together even before their debut in 2013.

In Burn The Stage, he mediates between two members’ dispute. He says during their pre-concert huddle:

Bit-Hoon, a former trainee of Big Hit Entertainment, also sheds some light into RM’s leadership style and abilities. He recounts in his YouTube video:

“It was when I was still new as a trainee. Namjoon gathered every trainee together. And he spoke in front of everyone there.

‘I might fail to be a BTS member, and it might be Jihoon that becomes BTS, or another friend could be the one. We don’t know who is going to become what. But when we are competing each other, let’s have competition in good faith.’

He had this mindset. Have the competition, but don’t be dirty and build walls in between. Help each other and be successful together by competing well. If we become another team rather than BTS and make debut separately, we should still support each other. Even if the debut team gets divided into two, we must make ourselves debut together. If there is anyone falling behind from practices, practice together and help them.

He was talking about these in front of everyone. Ah, and (Namjoon) also said, don’t give up but endure till the end as our best. Let’s not leave because we are not good. If there is anything insufficient, practice harder, and survive till we make our debut. I can remember him talking like this.

You can watch the full video below. Translations are taken from the same video. Credits go to 빛훈TV.

And of course, we cannot leave out BTS’ speech at the United Nations where RM spoke at the launch of UN’s Youth 2030 strategy which is aimed at empowering young people.

I’d like to ask all of you, “What is your name? What excites you and makes your heart beat?” Tell me your story. I want to hear your voice, and I want to hear your conviction. No matter who you are, where you’re from, your skin colour, your gender identity, just speak yourself. Find your name and find your voice by speaking yourself.

Thus, it comes as no surprise that many of their fans who find this young man to be an inspiration in their lives would end up tweeting about him on President’s Day on Twitter.

The reactions from the locals are quite funny though. Take a look.

Okay I'm utterly out of date when it comes to music, much less something tangential to my world such as Korean rap, so I had to Google BTS/Kim Namjoon to see what was up with the hijacking of the #PresidentsDay tag.

Shoutout to the BTS armies for hijacking the #PresidentsDay tag for their beloved Namjoon. The people who would be truly bothered by this are exactly the sort of jerks I like to see bothered, I thank you all for their tears.✌🏼 pic.twitter.com/XkpynY4BkY

And here are some Tweets from ARMY:

Did armeries really took the tag for US presidents and made their own? 😂😂😂😂😂😂😂😂😂😂😂😂😂😂#PresidentsDay pic.twitter.com/75olXMiHeA

You can count on ARMY for funny edits.

This is one fan thoughtfully thanking the “First Lady”.

Appreciation post to the first lady of the house (since he doesnt have a wife for now)
Thank you NAMJOON's Mom for allowing your son to be part of our lives.
Thank you for raising him with intergrity and good manners. He saved many dying souls.#PresidentsDay @BTS_twt pic.twitter.com/raaWStANpD