You are here: Home / Latest / BTS Funko POP! – Where To Buy Them

Funko Inc, maker of pop culture collectibles, unveiled their Pop! Rocks BTS edition and are now available for pre-order. US ARMY know the brand for making pop culture figurines and bubble heads, but many international ARMY’s are getting their first introduction to the brand.

Fans have been anticipating the Mattel dolls, but Funko has beaten the former in the race to market BTS in the toy market.

If you’re trying to get your hands on these, then good for you! High sales of the BTS lineup will show execs that there really is a ready consumer base for the boys. This will raise BTS’ value even more.

Where to Buy Your BTS Funko

So, where do you buy a BTS Funko figurine?

The good news is that you can pre-order these babies from Barnes & Noble, or from trusty Amazon. They’re available in one pack, but you can also buy them individually.

(We’ve already placed our orders and it seems Amazon doesn’t have the 7-pack unlike B&N. )

And here’s an update! As of March 7, 2019, Big Hit announced that the dolls are now available in the Big Hit Official Shop. Check them out HERE.

The bad news is that they don’t get released till May 27, 2019. That’s the official word from the Amazon product page, at least. But don’t worry. The important thing is to secure your order because guess what?

The exciting news is that ARMY being ARMY, we sold out the dolls really fast. The stores restocked but who knows how long stocks will last this time?

When the BTS Funkos were first offered on Amazon, BTS figures occupied the top slots of Amazon’s Bestseller list for Action and Toy Figures. There was one exception though. While Jungkook was leading the pack, the Post Malone figure managed to get ahead of the other members. No worries. We’re in good company. 🙂

The figurines are set in the Funko mold. What makes them distinct are their hair colors and clothing. The company has decided to go with the boys’ clothes from the Love Yourself Answer F album. Check out this concept photo from the F version. 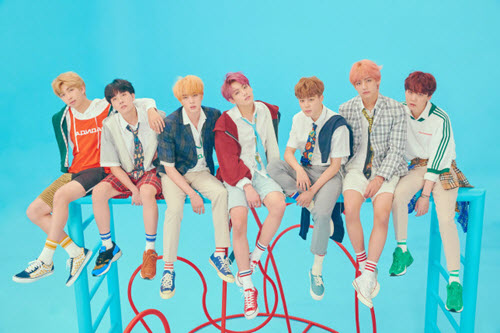 And check out the Funko Pop! dolls again:

Which begs the chilling question: Will there be other versions?? Our wallets are shaking.

If you’re not familiar with the brand, here’s a short clip on how the company create their toys. Can you imagine them doing the concept for the BTS dolls and creating them? We hope they come out with a video ala BT21. (Hello, Funko! We hope you’re listening!)

Believe it—it’s an exciting time to be alive right now. Not only do we see BTS propel themselves from being that underdog group from a small company to a worldwide success, we might also be seeing our beloved boys becoming household names in the US.

From “What’s BTS?” confusion to now-instant recognition and positive recall, we can only hold hands in a prayer circle and watch even more good things happen to 7 humble, talented young men.